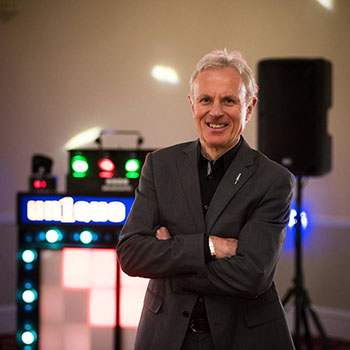 Owned, managed and operated solely by myself, Ian Macindoe,  Un1que was established in April 2001. However you have to go back more than 35 years (and counting) to get the whole story which you, the prospective client, may find of some interest when looking to book entertainment for your BIG event.

In 1978, while still a student and working part time in the Queen’s Hotel in Aberdeen, I had my first taste of DJing. The then resident disco, San Fran Disco (what a great name for a disco!) ‘allowed’ me to try my hand at the beginning of functions and so my first tentative steps were taken along the DJing path. Becoming more involved and ultimately joining the ‘team’ merely whetted my appetite for setting up on my own. The result? – the launch in October 1981 of ‘Touch of Class’. Over the next 17 years, Touch of Class established itself as Aberdeen’s number 1 mobile disco, with a pool of up to 12 DJs using 10 sets of gear and playing in many of Aberdeen’s premier venues.

But in 1998, wishing to concentrate more on my full-time career, I sold Touch of Class to two friends and former DJs who initially were keen to retain my services as a DJ. With Touch of Class going from strength to strength, hurtling towards the new millennium, I was now working only as a DJ (as opposed to roadie, secretary, accountant, driver, etc…). Whilst revelling now in purely a DJing role for Touch of Class, and indeed anyone else who required my services at this time, the seed was sown to start up all over again. But this time, it wasn’t to be quite like the last time….

And so in April 2001 Un1que was born. I had realised over the intervening years that for me at least, big is not necessarily beautiful. As the name Un1que suggests, there are strong links with the number 1 – one owner/DJ, one booking/function on any one night, one point of contact, one voice from initial enquiry to Auld Lang Syne at the end of the night. In other words I take sole responsibility for every aspect of your event, no detail overlooked, no matter how small.

Over the years there have been many highlights – some better perhaps consigned to history! But I am proud to say that I have been frequently asked to DJ for fellow DJ’s at their special function, which I always take as the ultimate accolade. And in 1987 when Radio 1 came to town, I had the privilege of ‘entertaining’ some of my idols at the farewell party – Mike Reid, Simon Bates, Steve Wright, Gary Davies, et al – definitely a night to remember!

So there you have it, a flavour, a sort of potted history of Un1que. I look forward to receiving your enquiry for your function and being part of your special event helping to make the occasion everything you would want it to be – Un1que.